By Rutvij Hadap - September 10, 2019
ISRO's recent and the most complicated mission chandrayaan 2 was successfully launched from Satish Dhawan Space Center in Shriharikota with a hope of locating the presence of water on the south pole of the moon. The vikram lander was scheduled to land on the lunar surface on 7th September 1:55 am (Indian Standard Time). There was a lot of hype amongst all the people and everyones eyes were turned on the live broadcast directly from ISRO headquarters.

The lander had 4 reverse thrusters at each corner which were going to help break the velocity of the lander for a soft landing. This phase of landing was quoted as "15-minute window of terror". Initially everything seemed to be quite on track and the lander was going according to the expected path until the last 2.1 km when the lander suddenly lost contact with the ground station and went into complete radio silence. The lander seemed a little bit deviated from the path before loosing contact with the ground station. The scientists at ISRO are still continuously trying to establish a contact link with the lander.

But recently ISRO tweeted that the orbited has successfully located the lander and it is single piece. The orbiter scanned the lunar surface with its thermal camera and had success in locating the lander which seems undamaged but a little tilted than expected. The team is still analysing data and figuring out what went wrong and weather the mission could still be driven to a 100 percent success. Below is the snapshot of ISRO's official tweet. 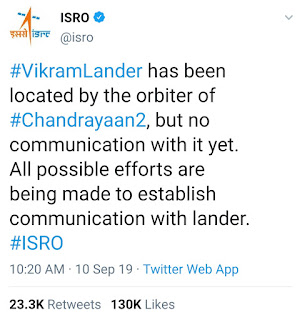