Huawei recently announced it's New OS in Dongguan, China. This Operating System was in development since last few years and now it's finally here. Huawei claims it to be better than the Google's ongoing project "Fuchsia OS" as it uses an non-distributed design whereas, harmony OS is going to be a microkernel based Operating Sytem.

Huawei says that it is hard to deliver a smooth user experience across different devices with a huge code in Linux core. According to them this new OS gives flexible deployment over various devices which makes it easier for app developers to develop their applications in various scenarios. They also say that the use of microkernal increases security and the microkernal only provides some basic services like thread scheduling and IPC(Inter Process Communication).

Harmony OS uses a distributed virtual bus with a simplified protocol that uses a single layer rather than four layers which significantly boosts the payload efficiency. This improves the discovery of various external connections of other hardware devices like speakers, displays, etc. Harmony OS uses a "Deterministic Latency Engine" in comparison to the Linux Kernal's scheduling mechanism which contributes to a precise resource scheduling with real time load analysis and forecasting which in fact results in a 25.7% improvement in response latency and 55.6% improvement in latency fluctuation. 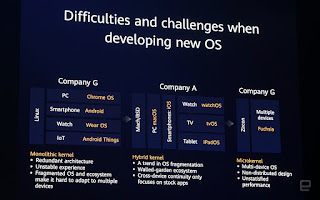 The most biggest challenge Huawei will have to face is to create an alternative ecosystem of its own. Consumers are very much used to the Google's flawless Android ecosystem that forcing them to shift form the platform is going to be a tough time. Still Huawei is developing its own alternatives like app gallery which is like play store and recently launched Huawei Mobile Services as alternative to Google play services.

The so far on paper theoretical claims seem to be quite promising, Huawei is directly competing with Google's Fuchsia OS they claim the efficiency is 5 times better than the current systems, but which one is better only time will tell. Till then the battle remains to continue..
Tech Highlights