Samsung has finally launched its new device in the Note series line-up, well so lets discuss about the features this phone offers in comparison to the pricing.

The main highlight of the Note series has always been the S-pen and this year too its not an exception. But what has changed this time is that the S pen is not the only highlight, we've got many features to talk about in various aspects. Starting with the S pen it provides us with a number of gesture controls which changes the way how we interact with the device. There are a number of gestures that samsung provides for tasks like change switch between cameras, zoom in or out, change the volume or just browse through the photos. Another cool feature is that now the things you write down with the S pen can be instantly turned into text which makes it easier to share and read. 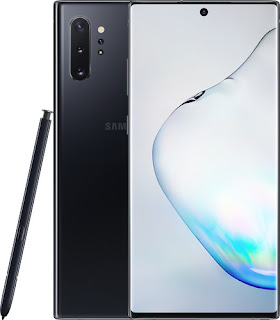 In terms of performance the Note 10 Plus  is a power house. It ships with a Snapdragon 855 processor which is the best SOC from Qualcomm and coupled with 8/12 GB of RAM will give the best experience for consumer from any perspective. The phone comes with a 4300 mAh battery which should probably be enough for the massive 6.8inch display. Samsung also says that the phone supports 45 Watt quick charge which is amazing. 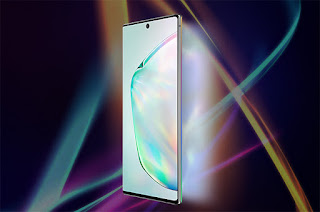 The Note 10 Plus Supports a massive 6.8 inch display which Samsung calls Cinematic Infinity-O Display. And to be honest the display is really stunning. Samsung is a company that is known for manufacturing some beautiful display panels and that reflects in their smartphones. If you're planning to play games or watch your favourite content I'm sure you'll get much more than satisfaction with this display. The display has punch out at the middle of the forehead for the placement of the front camera which is significantly smaller than Samsung's previous phone's (S10 and S10Plus). Now coming to the srorage, the phone comes with upto 512 GB UFS 3.0 internal storage and upto 1 TB Micro-SD card support. 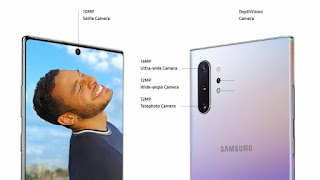 Camera can also be considered as one of the main highlights for this phone as Samsung has made some great improvements and added some new features into the phone. Starting with the number of lenses this time Samsung has gone with three camera lenses at the back with a depth vision lens also called "Time Of Flight" sensor. The camera setup comprises of a 16 MP ultra wide lens, 12 MP wide angle lens and 12 MP telephoto lens, and a 10 MP front camera. The camera has live focusing this time which is an additional feature along with a new feature, if you zoom into a particular part of the screen while recording a video you'll be able to listen the sounds from that part pretty clearly as the camera will be focussed on that particular section.

The phone is expected to be sold in India from 20th August 2019, and the expected price for the maxed out 12 GB Ram and 512 GB storage variant is Rs 89,999/- as sources say. Samsung has also announced to launch a 5G variant of the phone anytime soon in upcoming months so lets keep the fingers crossed.
Smartphone Reviews