By Rutvij Hadap - August 28, 2019
RedmiBook 14 was Redmi's first laptop and this year Redmi has announced the next version of RedmiBook 14 which will launch on 29th August. The RedmiBook 14 will be launching with Intel's 10th Generation Processors which are based on the new Ice Lake architecture. This will surely improve the overall performance and give a significant graphical boost. 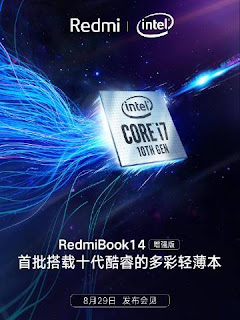 The laptop will be launched with Redmi TV, and two other smartphones i.e. the Redmi Note 8 and Redmi Note 8 Pro. So let's see when we'll be getting it in Inda.
Daily News