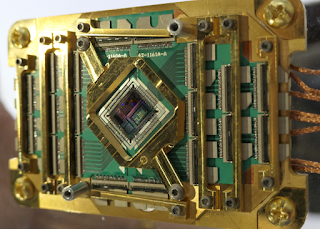 ● Why do we need Quantum Computing ?


As technology is progressing day by day we are facing a growing need of huge processing power which can analyse and resolve huge amount of data as per our required needs. We need computers which have tremendous computing power and process data more accurately and efficiently in various fields. Our traditional computers aren't built upto the purpose, so we felt the need of developing a computer just for the purpose.

● What is Quantum Computing ?


Now quantum computing is basically a new approach towards solving problems which our traditional computers lack. Quantum Computing is the use of quantum mechanical phenomenon such as superposition and entanglement to do the required computation. The classical computers which we use in our day to day life deal with binary algorithms which use a combination of zero's and one's simultaneously which are called bits. Where as a quantum computers use the combinations of zeros and one's both at the same time and are termed as quantum bits or qubits. Qubits are fundamental of quantum computing.


The quantum computers we have today are restricted to today's technology and hardware, so we have not yet created a large scalable model. Though there are many still in use.

Below is the schematic diagram of an Quantum Computer listing its main components : 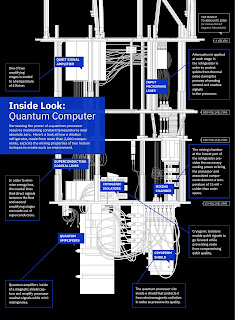 1) Qubit Signal Amplifier :- Well as the name suggests it amplifies the signal. It is cooled to a temperature of -269° Celsius. It is one of the two amplifying stages.


2) Input Microwave Lines :- The qubits need to be protected from thermal noise while sending and receiving signals to and from the processor and hence attenuation is applied at each stage.


3) Superconducting Coaxial Lines :- The coaxial lines transmitting signals between two amplifying stages are made up of superconductors as to minimize the energy loss between them.


5) Quantum  Amplifiers :- This is the second amplifying stage where the amplifier captures the processor signals and amplifies them eliminating the noise.


6) Cryoperm Shield :- It is a special type of shield which is fabricated to protect the quantum processor form any type of radiations.


7) Mixing Chamber :- It provides the cooling power to prevent the processor from overheating and cool it down. The temperature here is 15 mk which is colder than outer space.

● Applications of Quantum Computers and the future potential


Quantum Computers have a wide variety of applications in a number of fields. Let us discuss some of them in brief.


• Quantum Search :
It is found that quantum algorithms provide a phenomenal speed-up over the discrete classical algorithms for several problems. The best example of this can be a quantum database search. An major application of this can be a Password Cracker which can make an attempt to guess an encryption key for a file.


• Quantum Simulation :
Quantum simulation can be used to study the behaviour of atoms and particles at a nano scale. It can even help in faster development of nanotechnology.